I know my bible pretty well. I used to read it for personal devotions from Genesis to Revelation at least once a year for twenty-two years. In addition there’s all the additional study I did as a preacher. So when I read of Christian individuals and organisations refusing service to LGBT because of their Christian 'beliefs', I feel like I need to give them a lesson in Bible 101.

There was a time when LGBT people were forced to live restricted lives as they could lose jobs, housing, and promotions if their orientation was discovered. This fear of loss kept many in the closet, afraid of the consequences of being honest about who they were. But anti-discrimination laws changed in western countries to include sexual orientation along with gender and race.

This has not stopped Christian organisations and individuals from treating LGBT people differently based on their Christian beliefs and then claiming that religious freedom gives them the right to discriminate, "I can't//won't serve you". Let me give some examples.

In Australia a Christian Brethren owned camp site refuse to take a booking for 'Way Out', a Rural Victorian Youth and Sexual Diversity Project, who'd planned to run a camp for young people experiencing bullying and homophobia. The manager of the camp site said, "Our Christian faith, does not support or include the promotion of homosexuality".

In the UK, gay couples have been refused accommodation by Christian B & B owners who said, "We are not prepared to have that sort of activity under our roof".

"After Much Prayer" a Christian paediatrician in Michigan refused to treat a lesbian couple's newborn baby.

Where marriage equality has been recognised it has caused even more drama. Gay and lesbian couples planning for that special day are finding that some people won't hire them venues, cater, bake their cakes take photos, print their invitations or sell them flowers. And who is refusing these services? 'Bible believing' Christians in the name of "religious freedom". 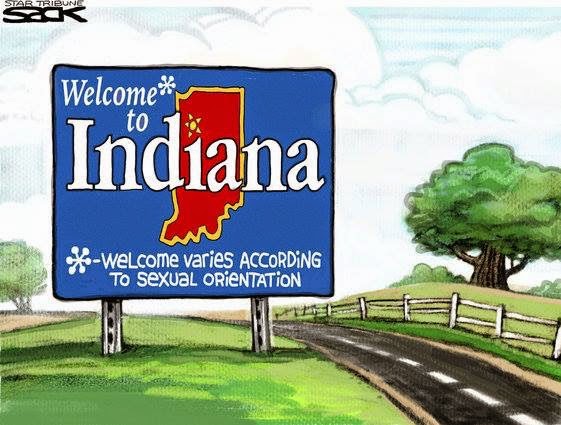 Two weeks ago the Indiana Religious Freedom Restoration Act, was signed into law by Governor Mike Pence. This would make it legal for businesses and business owners to choose whom they provide services to based on their religious convictions.  There is only one problem with this; it's not religious freedom, it's anti-Christian.

Actually, he told many. They were called parables and intended to teach a simple but valuable lesson to his followers. Enter the parable of the Good Samaritan. A story that people who went to Sunday school or Christians who read their Bibles are very familiar with.

We'll pick up the story here
25 Just then a religion scholar stood up with a question to test Jesus. “Teacher, what do I need to do to get eternal life?”
26 He answered, “What’s written in God’s Law? How do you interpret it?”
27 He said, “That you love the Lord your God with all your passion and prayer and muscle and intelligence—and that you love your neighbour as well as you do yourself.”
28 “Good answer!” said Jesus. “Do it and you’ll live.”
29 Looking for a loophole, he asked, “And just how would you define ‘neighbour’?”
30- Jesus answered by telling a story.

The story is of a man travelling from Jerusalem to Jericho, which was notoriously dangerous. So much so, that it was known as the "Way of Blood". Like many others, he was attacked, robbed and beaten by thieves and left wounded by the roadside. A priest passes by, sees him, and then crosses to the other side of the road. Then a Levite religious man showed up; he also avoids the injured man making a conscious decision not to help.

The third person to appear is a Samaritan. Yes, that meant they were from a geographical place, Samaria, but it also meant so much more. It's hard for us to comprehend exactly what this meant unless we understand the background and tells us why Jesus chose the Samaritan in this parable. It was not like Sydney versus Melbourne or East Coast versus West Coast rivalry, the word Samaritan was loaded with many centuries of intense religious, tribal, political and ethnic hatred, hostility and bitterness. Samaritans were hated by the Jews even more than their Roman oppressors. A modern day equivalent would be the Catholic/Protestant conflict in Ireland or the constant conflict between Sunnie and Shiite Muslims. So intense was the Jews hatred of the Samaritans that they would add miles and miles to their journeys in order to completely avoid going through the area and having any contact with them. The Jews referred to Samaritans as “dogs” and “half-breeds”.

The first two men who passed by were just like Jesus' audience and also like the religious scholar who stood up with a question to test Him. It was the despised Samaritan man who took the beaten man, tendered to his wounds, found him lodging to recuperate and covered ongoing expenses. The parable must have made it decidedly uncomfortable for the self-righteous Jewish leaders.

Jesus then asks 36 “What do you think? Which of the three became a neighbour to the man attacked by robbers?” 37 “The one who treated him kindly,” the religious scholar responded.
Jesus said, “Go and do the same.”

The message is clear. The first two religious passer-by's had the opportunity to demonstrate "love your neighbour as well as you do yourself” but chose to reject the opportunity. The radical "Christian love" that Jesus talked about in this story means treating others with kindness and respect and helping them when they needed it. Baking a cake for their wedding is not a huge ask.

I'm not sure how any Christian can read this well-known parable and then cry “I want "religious freedom" so I can walk away. Because of my beliefs I can't hire you a venue, cater for your wedding, bake your cake, take photos, print your invitations or do your flowers”.

Jesus also said some other things against this interpretation of "religious freedom". Rather, he said that true religious freedom is being an exceptional human being that does the unexpected.

"If anyone hits you on one cheek, let him hit the other one too; if someone takes your coat, let him have your shirt as well".

"Give to everyone who asks you for something, and when someone takes what is yours, do not ask for it back. Do for others just what you want them to do for you".

In Galatians 5:22-23 Christian's are encouraged to be filled with God's Spirit and then their lives will demonstrate the character of God. "But the fruit of the Spirit is love, joy, peace, patience, kindness, goodness, faithfulness, humility, and self-control. There is no law against such things as these".

If marriage equality has created anything, it has created another opportunity for Christians to actually BE Christians and embody the true meaning of the Christian message. When beliefs trump simply loving others then the essence of true Christianity has been lost.

Are gay people being too precious?

"What's the fuss" some say. "Surely you'd just go to another baker. If you know some business will discriminate against you why would you go there."

The problem with this is that in all these cases the gay couple had no idea of the vendors beliefs, just the service they provided. Had they known, they may or may not have used their services. I think we need to put ourselves in the gay couples shoes for a moment. Unless you've experienced being rejected like this you may not have an understanding of what it's really like.

You're planning a very special day. You're in love. You're excited. You go to the service provider to discuss your plans. Then they dropped the bombshell. "Sorry I can't provide those services because I'm a Christian and therefore I can't bake your cake is that would mean I am approving of your lifestyle". .....or words to that effect.

How does it make you feel to have someone say that to you? This may also have been said so that others around overheard.

Do the gay couple smile politely and say thanks for letting us know then leave?

At that moment you feel many things. Humiliated. Embarrassed. Crushed. Shamed. Mortified. Rejected. Angry. Lots of emotions. And what some people forget is that experiences like this can trigger past hurt and trauma for LGBT people. Most gay and lesbian people have experienced the pain of rejection in their lives. Some many times. Some of us have been rejected by our churches, Christian friends and family. It's painful. It hurts.

Subjecting gay and lesbian people to further experiences of rejection and trauma is cruel. Legislation to make it legal is not in the spirit of the law which is designed to protect not harm isn't it?. 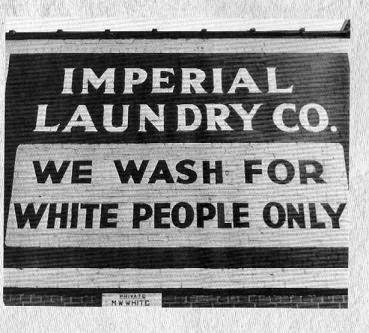 Will you serve me I'm gay?

If religious freedom laws are introduced then it gives people the right to discriminate. I don’t believe that gay and lesbian people should have to go around asking businesses and business owners the ridiculous question "Will you serve me/can I purchase your goods/services I'm gay?'

Maybe the solution would be for Christian businesses and business owners to have large signs in their premises saying "We are Christians. Because of our Christian beliefs we don't serve members of the LGBT community". Signs like these used to be in shops like "No coloured served here". Of course this is also ridiculous. I also doubt they'd be willing to do it as it that would mean that family and friends of LGBT people would also walk out and therefore they'd lose more business.

This religious freedom thing is hypocritical.

Let's take the example of the cake baker. Do they question every person who wants them to bake a cake for their wedding and ask them questions like. "Are you both virgins? Have you been living together before you get married?". No they don't. Why? Because it's rude and actually none of their business. But yet it IS against their Christian beliefs that say no sex outside of marriage.  They bake the cake without so much of blink of the eye or a twinge of conscience. This is hypocritical to target just one group of people who don't fit into your belief system and conveniently ignore the rest. It is most likely more about a homophobic attitude than a Christian belief.
© Anthony Venn-Brown
Anthony Venn-Brown is one of Australia's foremost commentators on faith and sexuality. His autobiography  '"A Life of Unlearnin - a preacher's struggle with his homosexuality, church and faith", detailing his journey from married, high profile preacher in Australia’s growing mega-churches, such as Hillsong, to living as an openly gay man, has impacted 1,000';s globally.  Anthony was the co-founder and former leader of Freedom 2 b[e], Australia’s largest network of LGBT (lesbian, gay, bisexual, transgender) people from Christian backgrounds. He is also an educator and consultant on LGBT/faith issues and leader in deconstructing the ‘ex-gay’ myth.

Anthony is the founder and CEO of Ambassadors &  Bridge Builders International  whose mission is to end the unnecessary suffering caused by ignorance and misinformation about sexual orientation by empowering LGBT community members, building bridges with the Church, providing resources and media/social networking activities.
Email; info@gayambassador.com
Twitter: @gayambassador
Anthony has been twice voted ‘One of the 25 Most Influential Gay and Lesbian Australians’ (2007 & 2009) and was a finalist for the 2011 ACON Community Hero Award.