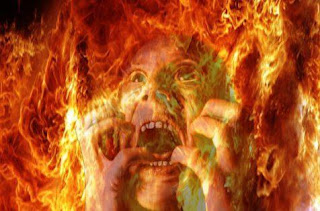 When people say they are struggling with unwanted same sex attraction and seek to be ex-gay, their minds play all manner of crazy tricks on them in order to keep the hope alive. Insidious denial, contradictions and mental gymnastics are the only way they can maintain the ex-gay facade. It's a sad and tragic reality to live in – two realities and neither of them fully real.

This experience is not limited to people in ex-gay type therapy. It is also a common experience amongst gay and lesbian people in Christian churches who are closeted and tormented about their unresolved sexual orientation.

In Freudian psychoanalytic theory, defence mechanisms are psychological strategies brought into play by the unconscious mind to manipulate, deny, or distort reality (through processes such as repression and rationalization), and to maintain a socially acceptable self-image or self-schema. This is clearly obvious in the person who believes that their homosexuality makes them unacceptable to God and others.

Cognitive dissonance is a term used in modern psychology to describe the state of holding two or more conflicting cognitions (e.g., ideas, beliefs, values, emotional reactions) simultaneously. The theory of cognitive dissonance in social psychology proposes that people have a motivational drive to reduce dissonance by altering existing cognitions (beliefs and reality), adding new ones to create a consistent belief system, or alternatively by reducing the importance of any one of the dissonant elements. E.g. 'I am not gay or homosexual I have SSA' or 'I'm struggling with unwanted same sex attraction'.

I hear this constantly when I listen to ex-gay testimonials. In one breath they speak about overcoming, changing, being married or having children and in the next breath they speak about the temptations and thoughts that still exist; as if these are inconsequential. They appear oblivious to the inconsistency and irrationality of their statements.

Often people in ex-gay programs or reparative/conversation therapies have sort them out because they have a tortured thought life or a sexual addiction or obsession that often plays out in pornography, chat rooms, saunas or beats. There is never any real emotional connection with the other person though. Because the addicted person wants to hide it is usually brief, anonymous sexual encounters.  They are afraid of intimacy as that will touch the very heart of who they are – gay. This must be avoided at all costs.

What the person is unaware of is that they have created a fragmented sense of self. The gay self is the secret self – the dark self which lives in a world of shame, guilt and fear . The other self is the public self that they believe is the one that will be acceptable and 'normal'. They live in two realities.

The other thing they  fail to realise is it that the denial, suppression and hatred of the gay self is what actually creates the addictions and obsessions.

Coming out, for most of us, is like an exorcism that releases us of the darkness we have lived in for years and caused us to believe awful things about ourselves. On the other side of the looking glass though are freedom, light and an authentic life. :-)