"Ex-gay" formal apologies have been happening for a number of years. They began in 2007 at the first "ex-gay" survivors' conference with former leaders Michael Bussee, Darlene Bogle and Jeremy Marks followed closely by former "ex-gay" leaders from Australia. Whilst these were significant, they didn't get the same attention as more recent ones have.

John Smid resigned as Executive Director of Love in Action, a residential "ex-gay' program in 2008 but it wasn't till 2011 that he came out with an apology. Some rejected Smid's apology saying it was not enough. 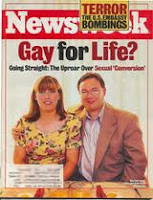 In April, this year an even more groundbreaking apology came from John Paulk who'd disappeared from public life since being discovered in a Washington gay bar in 2000. John was a former poster boy of the "ex-gay/conversion therapy" movement. He worked for James Dobson's Focus on the Family, on the board of Exodus and spoke regularly at their "Love Won Out" conferences. One of his biggest claims to fame was his appearance on the cover of Newsweek in 1998 with wife Anne. The responses to Paulk's admissions were stronger.

The message or the messenger – can they be separated?

The message proclaimed by Exodus and all the former leaders above was the un-biblical statement "homosexuality is a sin". I say un-biblical because it is impossible for homosexuality to be a sin as it is an orientation (amoral not immoral). The variations and interpretations of that theme have been endless. You are unnatural. You are sick/dysfunctional. You are an abomination. Homosexuality is a choice. You can't be a Christian and be gay. God can change you. etc. These messages have caused untold damage, including mental health issues, suicide attempts and the most tragic of all is that some have taken their own lives in their struggle to reconcile their sexual identity with the "Christian" message preached. Can an apology, no matter how sincere, ever change the past?

A day before, what would become the final Exodus International's conference in June, its president, Alan Chambers, released an apology to the LGBTQ community on the Exodus website. A month after the conference Randy Thomas, the Vice President, has also written a personal apology. These last two apologies have created the most intense responses. "Go to hell", "You know where you can shove your apology", "Alan Chambers is an evil son of a bitch" ....being some of the milder responses I've read. It's a long story, but I was actually at the Exodus conference and able to spend time with Alan Chambers and Randy Thomas. I have been in communication with Alan and Randy for some time, but attending the conference was the perfect opportunity to determine more clearly where they were on their journey. Meeting people face-to-face and getting to know them personally always makes a difference.

Randy's apology is not just an apology.....it's a confession

Reading Randy's apology is especially interesting as it looks back over twenty years of involvement not only as a participator but also a leader in the "ex-gay" myth. It demonstrates that Randy has done some very deep soul-searching and self-reflection.

He begins the confession/apology with.... "So many eye-opening experiences have occurred in the past twenty-four months – including the suicide of a beloved friend and former partner this past January. The loss of Michael forced me to face some issues I had not been willing to deal with until that time."

"My understanding of public policy at that time was limited to the talking points I was given to tailor my testimony around. I did not do much research beyond these talking points – and as a result, my perspective was limited and nearsighted."
"I helped build Andrew Comiskey’s (Living Waters) online platforms – platforms which have increasingly gotten more vitriolic and stigmatizing toward the LGBT community."
"I sometimes valued the shoulder pats I was given by religious leaders more than Jesus’ commandment to love and serve. That was wrong and I’m disappointed in myself"
"I directly empowered people to co-opt my testimony and use it against the gay community"
"I was attracted to this kind of power and allowed my conscience to be numbed so I could have a seat at their table. Again, I was selfish and prideful."
"In order to protect the reputation of some, I chose silence".

After detailing the various ways Randy had been inauthentic, manipulated and power hungry he concludes with.....

It is challenging for any individual to do such an honest personal inventory and be truthful about personal failures.  But to publicly tell all is courageous and to be commended. Especially knowing the spectrum of reactions this openness would produce.  For some in the gay community these words will never be enough and their intense hatred has been expressed openly. On the other hand, Christian conservatives have attacked Randy believing he has empowered the gay community by saying sorry. The interconnections of Christianity and homosexuality are generally volatile and sometimes downright nasty.

One thing I think many have missed in these recent events is the influence time of life has had on Alan (41) and Randy (45). I work with gay men and women who are in heterosexual marriages. It doesn't surprise me that many of these begin facing this incongruency in midlife. For some, midlife is a crisis but for most people it is a time of transition and reality check. We have to face the fact that our youth has gone and many of the things we'd hoped and dreamed for might not happen. It was like clockwork for me and just before my 40th birthday I was overwhelmingly confronted with the fact the thing I'd spent 22 years hoping and praying for (to be totally straight) was never going to happen. Alan has faced a similar reality and where he once preached he'd been transformed now honestly admits he still has 'same sex attractions.' His marriage of 16 years to his wife Leslie remains.

Randy on the other hand remains celibate. One of the things that can trigger a midlife crisis is an unforseen event such as a retrenchment, break up of a relationship/marriage or major health issue. Possibly the recent death of friend and former partner Michael has triggered Randy's deep level of self-analysis. His blog subtitle reads "Currently In a Mid-Life "Evaluation" Mode

My parents taught me many simple values I still hold on to today. As a young child, they taught me that when someone knowingly or unknowingly has wronged you and they say "sorry" that I should say "thank you" and not hold a grudge. This then creates the potential for both parties to move forward, whether that be together or separately. More than many others, I know the message, that our orientation is evil/dysfunctional, we choose it and it can be changed, formerly preached has damaged countless lives, families and relationships. Randy's and Alan's acknowledgment of that, regret and saying sorry is of great value to those who need to hear those words and will receive it.

How we respond to these recent events is a personal choice but one thing I have learned in life is that someone has to break the cycle of hate.  I, for one, want to be a catalyst for change, as I know that returning hate doesn't break the cycle.

Saying sorry does not automatically heal the past but it does create the potential for a better future.