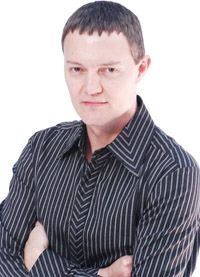 Sy Rogers is a gifted communicator and has an amazing story of redemption from a very troubled life. Our dialogue has been limited but has always been gracious and respectful. I’d heard many negative things about Sy but our meeting in Sydney in 2007 dispelled many of these.

When Sy was converted in the late 70’s, even though homosexuality had been removed from the list of psychological disorders and laws were changing that had classed gay men as criminals, there was still a great deal of ignorance about sexual orientation. Nowhere is this more prevalent than in the church. I was converted in 1969 when the concept of a gay Christian was inconceivable and my life was understandably steered in a particular direction; to try and change who I was. Even when I resigned from the ministry in 1991, I was only aware of two options. 1. Try and be heterosexual and you’ll get to heaven (which hadn’t worked for the previous 22 years) or 2. Accept your homosexuality and you will go to hell.

Was I becoming a Christian today I hope that my pastor would be well informed enough to help me see that my morality is a choice but my sexual orientation isn’t and that I could lead a life that honoured God as a gay young man. Today there are many fine gay Christians and a growing number of churches which welcome and affirm them.

There are still many who speak of Sy as an ‘ex-gay’ and that he preaches a re-orientation message. I don’t believe Sy would use that term 'ex-gay' to describe himself or believes that people need to be ‘healed’ of their homosexuality. His message these days is healing for all both gay and straight; a person’s sexual orientation is not the issue. I trust that these insights help dispel some of the confusion and bring a more balanced view of Sy’s journey and ministry.

The Complexities of the Sy Rogers Story

1. Homosexuality vs trangenderism
To listen, in length, to the Sy story is to realise that it is not a simple story of gay man becomes straight. Firstly, Sy is transgender which occurs in the womb and remains with a person throughout life. If you are well informed about sexual orientation and what it means to be transgender, then you will be aware that sexual orientation and gender identity are two different wiring systems in the brain. For example, some transgender men are sexually attracted to women and some to men. This is often confusing for heterosexuals to understand as their brains are aligned harmoniously with their gender identity.Sy lived as a woman for some time and was in the process of seeking gender re-assignment surgery when he was converted to Christ. Throw into his story years of sexual abuse, a self destructive lifestyle (not an exclusively homosexual experience), meaningless sexual encounters and a dysfunctional family upbringing (mother was an alcoholic) then it becomes a maze of issues. The sexual abuse issues are the ones Sy has most recently had to resolve. Probably the miracle in Sy’s Rogers story is similar to mine: we are still alive to tell the story. Problems develop when Sy speaks to church audiences who are relatively uneducated about sexuality and transgenderism. I’m sure there are still are large number of people in churches who naively believe all homosexual men want to dress and live as a woman and all lesbians wish they could be men. This is far from reality for the average gay man or lesbian. When uninformed Christians, with an already negative attitude towards homosexuality, hear Sy’s story, it’s easy for them to make false assumptions.
2. Terminology
Different terms appear in Sy’s story, homosexual, gay, transsexual, transgender, all mixed together and are hard for the average person to separate. One of the myths often presented in many church cultures is that ALL gay men and lesbians are highly immoral, drug taking reprobates who live a ‘homosexual lifestyle’. Sy’s story carries much of that stereotype which, for those of us who are a part of the gay community(as opposed to the ‘gay scene’), know is only reflective of a subculture and once again not exclusively homosexual. Heterosexuals live the same ‘lifestyle’.
3. Does Marriage = Heterosexual?
My assumption is that Sy would not actually claim that he is totally heterosexual today, but, because he is married to a woman, many would try and tell us that this indicates a change in sexual orientation. “Heterosexual functionality’ is not being heterosexual any many more than heterosexual men engaging in same sex activity in prison makes them homosexual. I’ve never met an ‘ex-gay’ who can honestly say their orientation, instincts, fantasies and desires are now completely heterosexual. In other words, that they think and function like normal heterosexual men. I was also married to a woman for 16 years and fathered children but it didn’t make me straight. You can change behaviours, control thoughts, resist temptations and lessen same sex opportunities but you can’t change inbuilt orientation. There is a substantial amount of scientific research that demonstrates this. Sy has chosen to be in a heterosexual marriage. I have to respect Sy and his wife’s choice and anyone else who chooses to live that way.
Personally, at the age of 40, I could no longer live with the inconsistency of presenting one thing to those around me and being another person inside. It was unsustainable and the disconnect created unhealthy behaviours and mental health issues. (For a detailed article on this go to 'Situational Heterosexuality')

To assume that Sy is an ‘ex-gay’ and that he believes all gay men and lesbians must become heterosexual raises several ambiguities.
1. Ambiguity No. 1. Sy has not been on the board of Exodus for quite some time. Possibly not actively involved at a board level for 15 years. He has spoken at some Exodus conferences though. He is last mentioned on the history page of their website in 1996.
2. Ambiguity No. 2. The Sy Rogers website makes no mention of homosexuality or ex-gay ministries.
3. Ambiguity No. 3. The Choices ex-gay ministry established by Sy (I believe), at the Singaporean Church of Our Saviour in 1991 still exists, but Sy is no longer involved and his name is not mentioned on records of it’s history.
4. Ambiguity No. 4. Sitting in the Sense and Sexuality Seminar at Hillsong in 2007, Sy spoke about purity of thought life, addictions, sexual abuse and wholeness without ever identifying heterosexuality as being more wholesome than homosexuality. I can’t really remember the word homosexual being used at the seminar. (Although he did mention those words of course when he told his story at the Sunday services). At the Sense & Sexuality Seminar, he spoke only of living a life that is pleasing to God and healthy for the individual. Was that because I’d been sitting with him in the front row of the church? I tend to think not.

What about Sy Roger's books, tapes and videos?

There are still Sy Rogers videos and publications out there which tell a different story and people promote him as an ‘ex-gay’. It’s been over two decades now since some of that original material was created and during that time there has been much scientific research on the subject of sexual orientation. It’s unfortunate that some of these resources are being used to promote a falsehood that God miraculously makes gay people straight and they will one day marry someone of the opposite sex.

Tragically some Christian parents and friends have used these materials to push their own agenda and will make statements such as "if Sy Rogers can change then so can you, you just have to be willing and have faith". This has resulted in untold suffering, mental health issues and even suicides. Only Sy has the power to counteract the false claims people are making. This is yet to be done. Personally, if I knew that my outdated materials were contributing to the breakdown of relatoinships with Christian parents and their children, depression, mental health issues, thoughts of and attempts to suicide, I'd be horrified and do all I could to correct that. Just the other day I received an email from a young man, now living as an openly gay Christian who told me that his parents forced him to listen to Sy Rogers tapes. Far from being helpful, he says these caused great internal conflict and depression. Because he has accepted the fact that he is gay, he no longer has a relationship with his parents who still hold on to their original position "If Sy can change so can you. You are not trying hard enough".

I’m currently working with a 40 year old man who has been involved in Exodus here in Australia for 20 years and used to promote the Sy Rogers story and resources. His words to me tell it all. ‘I was sold a very cruel lie’. One his wife and children are currently trying to painfully unravel.

Finally, I do wonder, considering the recent growth of the Gay Christian movement and that many more churches have become welcoming of gay, lesbian, bisexual, transgender  people, that if Sy had been converted today instead of three decades ago, if his journey might have been a very different one.

If you have been negatively influenced in the past by Sy Rogers, tapes, video's or published materials then I would like to hear from you. Maybe Church leaders or family members have given you Sy's books , videos or tapes telling you that Sy Rogers proves you can change your sexual orientation. If you have a Sy Rogers story to tell then please email me personally anthony@abbi.org.au . This will be a confidential conversation and nothing shared with anyone else without your express permission. Your help is appreciated.